05/17/2019 01:08 pm ET Updated 5 days ago Jackson Galaxy Reveals The Biggest Thing People Get Wrong About Cats The "My Cat From Hell" host also talked about how everyone can improve their relationship with their cats By Hilary Hanson Jackson Galaxy says society’s attitude toward cats has changed dramatically since he first started working with them The cat behaviorist hosts the long-running Animal Planet show “ My Cat From Hell ” and has celebrity clients who proudly broadcast their experiences with him But Galaxy, aka the “ Cat Daddy ,” told HuffPost that things were majorly different when he started his life as a cat consultant ― going to people’s homes to address issues they had with their cats ― in the mid-1990s The vast majority of his clients were women, since cat-loving men tended to be embarrassed and stay “in the closet” about it, he said And women who hired him often acted ashamed to be so invested in their feline companions, some going so far as to make Galaxy sneak around and hide his true identity “They would say, ‘Listen, if my husband asks, you’re just a friend!’” Galaxy said Courtesy of Jackson Galaxy "Love for a cat is trust," says Galaxy, who hosts Animal Planet's "My Cat From Hell

" There has since been what Galaxy calls a “revolution of cat awareness,” with more and more people really caring about understanding the creatures they share their homes with.

. Galaxy talked to HuffPost while promoting his upcoming Cat Camp ― a weekend event in New York City celebrating cats ― and dropped a few hairballs of wisdom about how we can all better understand, appreciate and share our lives with cats On what people still get wrong about cats “They think they’re failed dogs,” Galaxy said

“They still look at cats through dog-colored glasses, and I think that’s the biggest problem that I’ve seen consistently.

” Trying to force cats into a dog-shaped hole is a “disservice” that only leads to confusion and disappointment, he added.

Humans have been selectively breeding dogs to have people-pleasing traits for thousands of years Comparatively, cats largely domesticated themselves ― on their terms ― and they have much more in common genetically with their wild ancestors than dogs do with theirs “[Cats’] purpose on earth is not to make you happy,” he said “That sounds sarcastic, but it’s not” Cats can and do have strong bonds with humans ― people just need to realize what cat love looks like On recognizing cat love

All cats are different, and they express their love in different ways “There are many cats who, if they sleep on the foot of your bed, that’s an incredibly high compliment,” Galaxy said “And some will sleep on your face It’s different personalities” But there’s one thing they have in common “Love for a cat is trust,” Galaxy said That’s why cats rolling over and exposing their vulnerable bellies ― a move Galaxy has called the “cat hug” ― is meaningful, even though most cats are not big fans of belly rubs Another way cats express their feelings? The slow blink ― when cats slowly open and close their eyes while looking at people “That’s not ‘I love you,’ so much as ‘I trust you,’” Galaxy said ”‘I trust that you’re not gonna kill me’” The bottom line is that just because some cats don’t demonstrate their affection in a way that’s immediately obvious to humans, it doesn’t mean they don’t care “If you live with a cat and they spend time even being with you, near you, looking for you, they’re not just seeing you as a food dispenser,” he said “They do love you

” Courtesy of Jackson Galaxy Galaxy says one of the best things people can do to improve their cats' lives is to play with them every day.

On the No 1 way to improve your cat’s life

“Play with your cat every day,” Galaxy said.

“Remember that they’re little hunters and if you turn on what I call their ‘cat mojo,’ their inner confidence, by playing hunting games with them ― interactive play ― every day, you’ll see a demonstrative difference in their overall physical, mental, spiritual health And your bond with them will increase twofold immediately, within weeks” On the importance of spaying and neutering “Spay and neuter your cats,” Galaxy stressed

“If you haven’t done that and they live in your house ― they’re miserable.

And if they’re in your house, they pee on things, they pick fights with other cats. 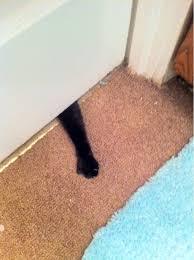